Any Creatio product is a set of packages.

A Creatio package is a collection of configuration elements that implement certain functionality. On the file system level, packages are directories with subdirectories and files.

To expand or modify functionality, install the package with the desired features. Development of additional functionality or modification of the existing functionality is only possible with custom packages.

Creatio's primary packages include packages available in all products.

The Section Wizard and Detail Wizard create various schemas that must be saved to a custom package. A fresh Creatio installation has no packages open for modification with the exception of the Custom preinstalled package. You can add schemas to this package manually or using the Wizards.

We recommended using the Custom package if:

To develop in a custom package, specify the name of the relevant package in the Current package (CurrentPackageId code) system setting.

If you upload the package to the version control system, the directory that matches the package name will be created in the package repository. 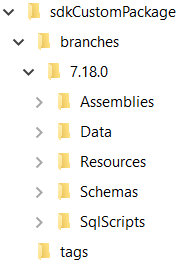 The structure of the package directory:

SVN integration is enabled in Creatio by default. To set up SVN integration, modify the value of the defPackagesWorkingCopyPath setting's connectionString attribute in the ConnectionStrings.config configuration file. This setting contains the path to the directory that stores working copies.

Creatio makes and uses a working copy of each custom package with versioning enabled in SVN integration mode. The working copy contains custom packages organized as a set of directories and files. The Creatio SVN client synchronizes this data with an SVN repository. We recommend specifying the path to a permanent directory in the defPackagesWorkingCopyPath system setting. The OS may clear the temporary directory specified by default. Do not specify ...\Terrasoft.WebApp\Terrasoft.Configuration\Pkg as the repository of working package copies in Creatio .NET Framework.

The package directory structure in the file system:

Creatio architecture implements this principle using package dependencies. Each package contains certain Creatio functionality, which the other packages should not duplicate. If a package requires functionality from a different package, set up dependencies between the corresponding packages. 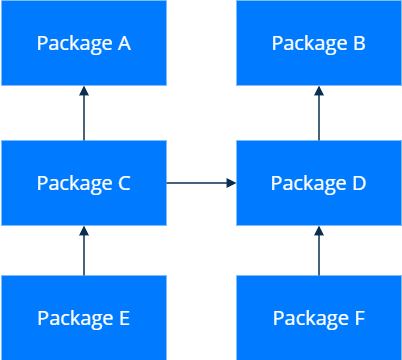 As of version 8.0.1, Creatio adds dependencies of custom packages automatically. Dependencies are added based on the entire package hierarchy. This allows you to add fewer dependencies manually. For example, if a business process uses configuration elements of the Base, UIv2, and Completeness packages, only the Completeness package is added as a dependency of the current package, since it depends on the UIv2 package, which, in turn, depends on the Base package. 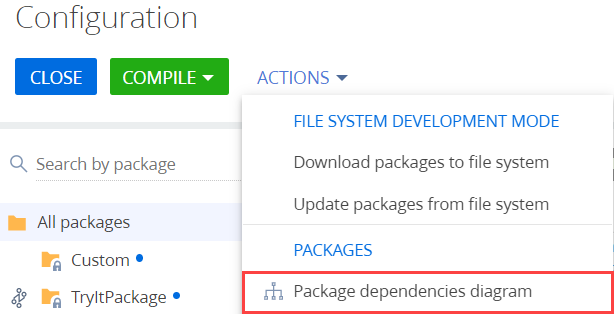 The dependencies diagram will open in a new tab. 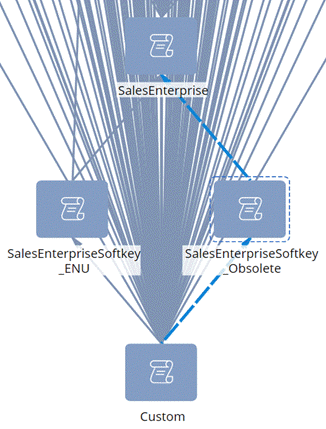 You can add dependencies to a custom package at any time. 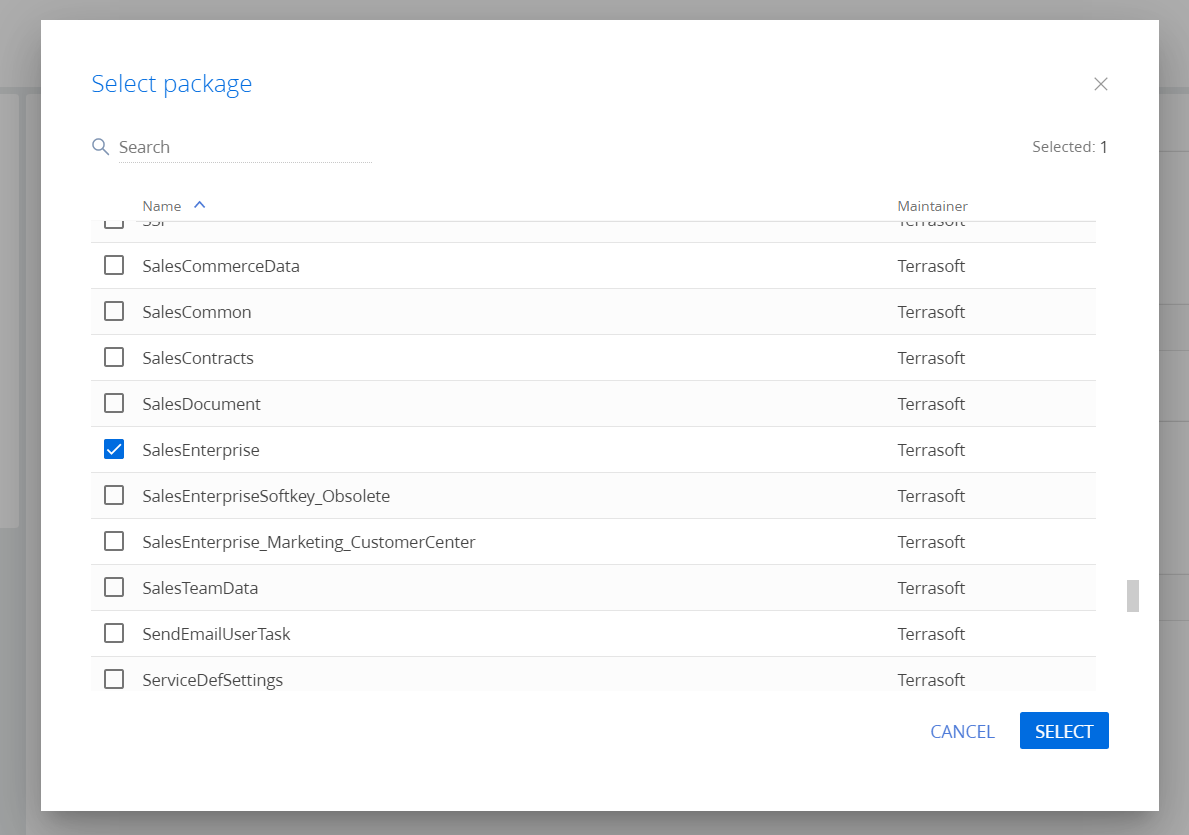 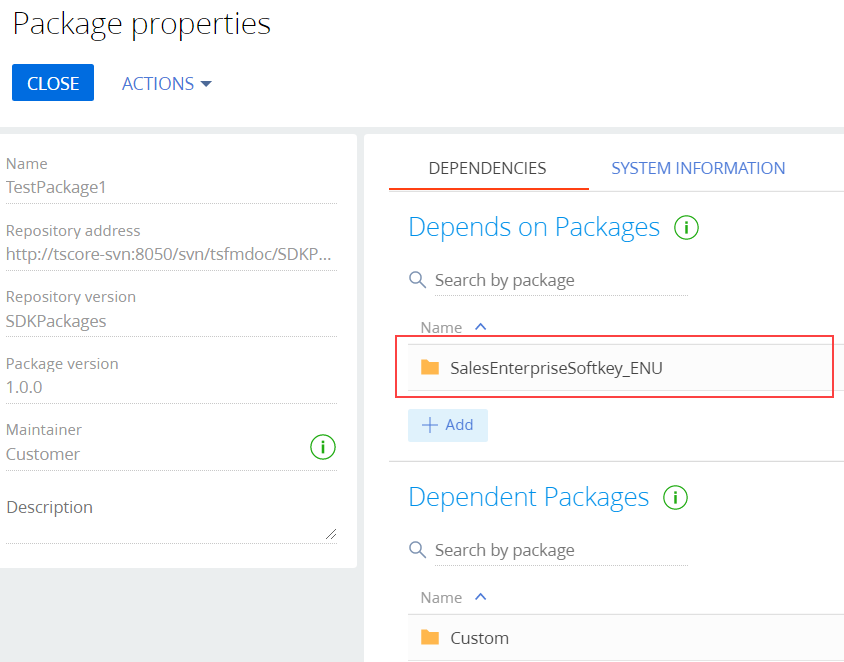 Creatio adds new packages to the dependencies of the Custom preinstalled package automatically. 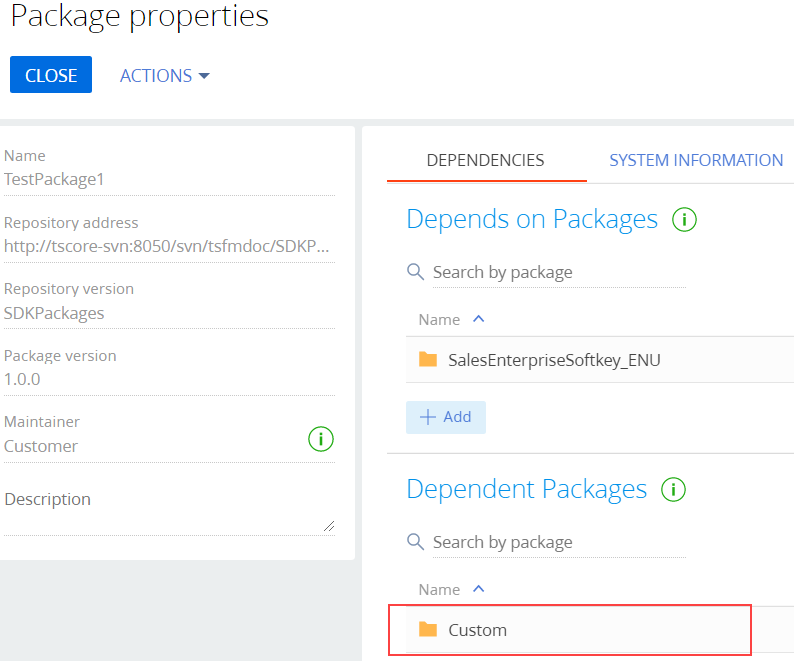 Creatio stores the list of dependencies in the package metadata. View the metadata in the DependsOn property of the object defined in the descriptor.json file.

The DependsOn property is an array of objects that contain the package name, version, and unique identifier. Use the identifier to define the package in the Creatio database. Creatio adds separate descriptor.json files for each package version.

Bind data to the package

If you create a section in the Section Wizard, Creatio will bind data the section requires to get registered and operate correctly to the package automatically.

Bind data to the package that contains the developed functionality in the Configuration section.