The [Stage] case element denotes a general progression milestone within the case workflow. A stage can contain a number of required and optional steps. The stages of a case are displayed on the workflow bar in the order of their completion. To modify the sequence of stages, drag & drop a stage.

A list of case stages is available in the [Opportunity stages], [Lead stages] and [Case stages] lookups or any other lookup, created while setting up a section. Each new stage added in the case designer will be saved in the corresponding lookup.

How to add a case stage

button on the stage panel. The button is displayed next to the last stage on the workflow bar, and when hovering the mouse over the spaces between stages. That enables you to add stages both sequentially and in random order. (Fig. 1).

The setup area will be displayed once you add a stage. 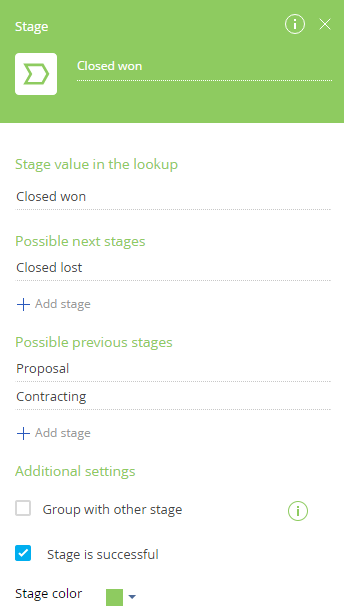 [Stage value in lookup] — the lookup record that corresponds to the current case stage. Map case stages to lookup values here. If the lookup does not have the required stage, you can create it directly from the setup area. To do this, enter the name of the stage in the [Stage value in the lookup] field. Each new stage added in the case designer will be saved in the corresponding lookup. This is a required field.

[Possible next stages] – select case stages to which you can transition from the current stage. By default, all case stages are available.

[Possible previous stages] – select case stages from which you can transition to the current stage. By default, all case stages are available.

[Group with other stage] — select stages from the lookup to group with the current stage. Grouping stages enables them occupy same slot on the workflow bar. The workflow bar displays grouped stages as a drop-down list. The stage specified in this field becomes primary and is placed before the current stage on the stage panel. The [Group with other stage] checkbox becomes uneditable if the stage is already groped.

The [Stage is successful] checkbox determines the stage at which the case is considered successful. The checkbox is displayed only for final stages.

[Stage color] – the color of the workflow bar on this case stage.

How to delete a case stage

You can always delete unnecessary case stages and steps. To do this, select the stage and click

If a case stage is deleted, all its steps will be deleted as well. The stage will not be deleted from the corresponding lookup.

•How to set up a case with approval

Ask a question
Ask the community