Creatio can be integrated with a number of automatic telephone exchanges (Private Branch Exchange, PBX), which enables users to manage calls directly in Creatio UI. Phone integration functions are available in the form of a CTI (Computer Telephony Integration) panel, as well as the Calls section. Standard CTI panel functions:

All calls made or received are stored in the Calls section. In this section, you can view when a call was started, when it ended and how long the call was; as well as the list of system records connected to the call.

By default, Creatio cloud has a function for making calls between system users without using any additional software.

Depending on the integrated phone system and specifics of its API (Application Programming Interface), different architectural mechanisms are used. The API also affects available phone integration functions. For example, the call playback function is not available for all phone systems, the web phone is available when integrating with Webitel, etc. Regardless of the phone integration mechanism being used, the CTI panel interface remains the same for all Creatio users.

There are two types of integration methods: first party and third party integrations.

JavaScript adapter on the client side 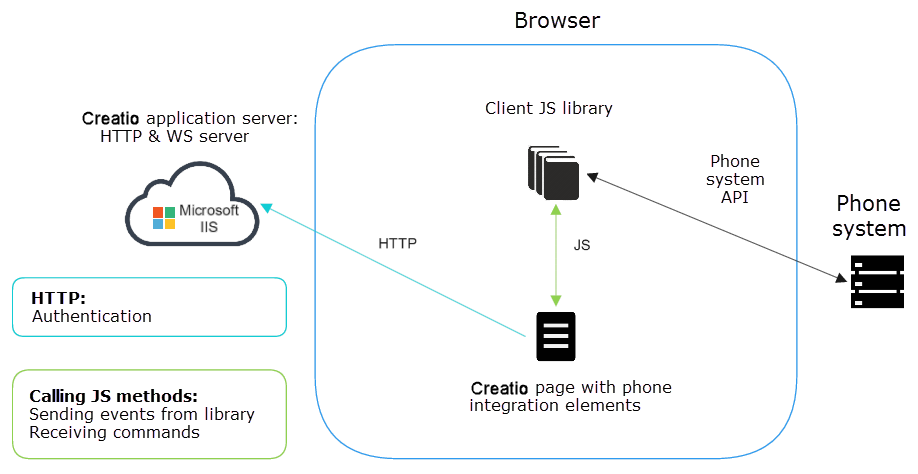 This integration method can be used with a first party phone system API, such as Webitel, Oktell, Finesse. Webitel and Oktell connectors use WebSocket as connection protocol, while the Finesse connector uses long-polling http queries.

The advantage of the first party integration method is that it does not require any additional nodes, such as Messaging Service. Using an integration library, the CTI panel connects directly to the phone system server API from a browser on the user's PC.

For incoming calls the phone server passes the new call start event and call parameters through WebSocket to the client integration library. When receiving a new call command, the library generates the RingStarted event that is passed to the application page.

For incoming calls, client part generates the call start command that is passed through WebSocket to the phone integration server.

Terrasoft Messaging Service on the server side

For incoming calls the phone system passes the new call start event and call parameters through the adapter library. When receiving a new call command, the Messaging Service generates the RingStarted event that is passed to the client.

Interaction between the phone connectors and Creatio

All connectors interact with configuration through the CtiModel class. It handles the events received from the connector.

The list of supported class events is provided in table.

Supported events of the CtiModel class